In SurgeScript, objects are units of code and data. Each object defines a finite state machine, a mathematical construct used to describe the behavior of in-game objects.

Games implement what is called a game loop. In SurgeScript, the game loop is defined implicitly via state machines. State machines are one of the key features of SurgeScript.

A finite state machine is a mathematical abstraction composed of a finite number of states and by transitions between these states. Only one state can be active at any given time (we'll call it the active state). There must be one initial state (i.e., the first one to be active). A transition is a change of the active state that is triggered when a certain condition is met.

As a concrete example, suppose that you want to create a door in your game. You, the developer, may open or close the door at will. But what is a door? We have just given informal description of the problem. However, we need to transform it in something more rigorous. Example:

A door is an object with two states (see the Figure below): 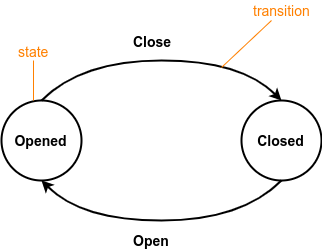 In SurgeScript, each object has a name. Objects may have any number of states you'd like. The initial state is always called main. The syntax is as follows:

The following code shows an example of a door that opens and closes (it keep changing states) every 2 seconds:

Notice how the code just shown defines states and transitions between these states. Each state contains its own code.

Note: once a state is active, its code will be repeated at every frame of the application until the state changes or until the object is destroyed.