In SurgeScript, objects have a hierarchical relationship. Suppose that object P spawns (or instantiates) object C. We say that object P is the parent of C. Similarly, object C is a child of P.

An object may spawn many children. However, all objects have only one parent. This relationship between objects form a hierarchy (a tree). The Figure below shows an example: 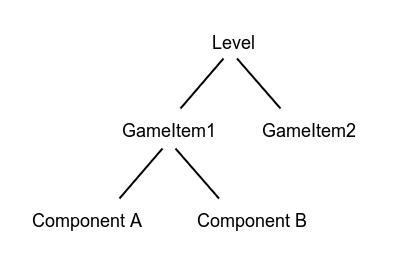 In SurgeScript, the root of the hierarchy is a predefined object called System. Its parent is itself. All other objects are descendants of System.

You can use spawn() to instantiate an object. Example:

Function spawn() may be invoked on objects other than the caller. In this case, the caller won't be the parent of the newly created object:

When you spawn an object, make sure you store a reference to it somewhere.

If an object cannot be reached from the root (no reachable object has any references to it), it will be automatically destroyed by SurgeScript's built-in Garbage Collector.

Objects can be destroyed manually by calling destroy(). Whenever an object is destroyed, its children are destroyed as well.

Relevant data about the object hierarchy can be obtained using the following properties and functions (find more on the Object reference):

The output is as follows: